A brief insight about the person behind the Cuemon for .NET project that lets you get acquainted with the homo sapiens behind the countless zeros and ones.

He (gimlichael - V44.140) is the author behind this project and lives in the outer province of Denmark in a small town named Gilleleje.

My given name is Michael Mortensen and I am a self proclaimed Clean Code Evangelist and passionate developer/geek who has a professional background in both operations and development since 1999. Before my career, I started my curiosity in regards to web development in 1996 with my very first website (in plain old HTML), which strengthen my goals to become a full stack developer later on.

Besides this cool, fun and amazing project, I am also employed as a Senior Application Architect in one of the top ten largest companies here in Denmark. The driving force of my work lies in SOLID and DRY development of solutions rooted in SOA, interoperability and scalability. 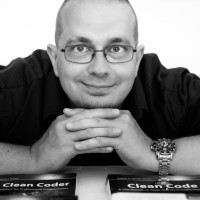 Having a broad knowledge on .NET / .NET Standard / .NET Core / .NET Framework it is my driving force to learn, adapt, design, develop and tweak every little bit of bits and bytes out of these platforms with the power of C#.

It is no easy task to design and build an assembly family as big as the Cuemon for .NET. The following products and the associated companies is part of the development lifecycle and has one way or another contributed to the existence of this ever growing assembly family.

It goes without saying, that without Microsoft .NET there would be no Cuemon for .NET.

ReSharper from JetBrains is an indispensable Visual Studio extension that makes development, refactoring and unit testing a bliss to work with.

DocFx is used to produce documentation from source code including raw Markdown files.

Azure DevOps from Microsoft is used for CI/CD integration with GitHub.

Visual Studio 2019 from Microsoft is used as the primary tool for writing CSharp code.

Visual Studio Code from Microsoft is used to write anything else but CSharp code.

GhostDoc Pro from SubMain is used to write all the source code documentation.

Ghost by Ghost Foundation is the blogging platform used by this project.

StackOverflow.com by Stack Exchange Inc. for providing the community for developers helping out each other.

NuGet Package Explorer is a very helpful tool to iron out kinks of NuGet packages.

GitHub from Microsoft is used to host the source code of Cuemon for .NET.

Distributed packages are based on NuGet.

If you by now have investigated time in Cuemon .NET Standard, you may have noticed that the naming conventions is similar to the one found in the Microsoft .NET Framework; this is by intent to adapt the fine work of the architects and engineers at Microsoft.

It is also worth mentioning, that all the assemblies are more or less strictly developed following the book; Framework Design Guidelines by Krzysztof Cwalina and Brad Abrams - a must read for all coders, programmers, developers and derived architects.


What should I call you?

It might seem trivial - but comming up with a name to a framework is no small task. In fact, the name for this framework was a combination of several things:

Without further ado Cuemon .NET Framework was born as a brand new assembly package to complement the Microsoft .NET Framework. Fun fact: the original, internal name prior to 2008 was MM.Framework.